The MXGP of Asia in Semarang, Indonesia is complete and one to remember! The weekend was full of action all leading up to today’s racing where Red Bull KTM Factory Racing’s Jeffrey Herlings and Jorge Prado took their respective overalls while gaining ground in the championship standings.

From the first race of MX2 to the final race of MXGP the racing was incredible and challenged the world’s best riders. The MX2 title chase is now even with both Red Bull KTM Factory Racing riders Pauls Jonass and Jorge Prado tied at 550 points while the fights in MXGP continue with new faces battling for wins!

Starting off the Sunday at the new and massive Semarang circuit was a formal opening ceremony alongside the Skybox. The opening ceremony started with the national anthem, then hosted a traditional Semarang dance performance, and concluded with Youthstream Vice President David Luongo, FIM Asia President Mr. Stephen Carapiet, Chief of the IMI Mr. Sadikin Aksa and Mayor of Semarang Mr. Hendrar Prihadi, S.E. M.M. thanking the fans and showing their appreciation for the hospitality shown to MXGP.

The competitors in the 2018 MXGP World Championship are as tough as nails or in Red Bull KTM Factory Racing’s Jeffrey Herlings case tough as the plate and screws of his recently fractured collar bone. Herlings came into the Indonesian trip unsure of his situation but by the end has come away with 97 championship points of the 100 available.

The opening lap action continued with Team HRC’s Tim Gajser making his way to third and second in front of Herlings briefly. Wilvo Yamaha Official MXGP’s Jeremy Seewer and Monster Energy Kawasaki Racing Team’s Julien Lieber collided on the uphill triple which sent Seewer tumbling, neither rider was injured but Seewer did not rejoin the race.

Herlings struggled to keep momentum at the start of the race and was passed by both Gajser and Paulin on lap 2 with Monster Energy Yamaha Factory MXGP’s Romain Febvre closing in as well. Cairoli’s lead was then taken by Gajser and Febvre was past Herlings who was immediately under pressure from Desalle.

Febvre and his fellow frenchman, Paulin, kicked off a battle for third swapping positions all in front of Herlings. Herlings took advantage of the battle and was into 4th past Paulin. Desalle then banged bars with Paulin eventually finding a way by the Frenchman.

Herlings made a move around the outside of Febvre and was then past Cairoli in the same lap. From that point Herlings gained time on Gajser and made a pass lap 13 just before Febvre crashed out of 4th. At the finish Herlings took the win with Gajser 2nd and Cairoli 3rd.

Race 2 was started with a second Fox Holeshot from Cairoli with Herlings, Desalle, and Seewer alongside. Febvre was back for Race 2 but fell on the start and had to fight back from dead last. Cairoli’s good start was short lived when he dropped 5 position in the first 3 turns back to 6th. Desalle was in the lead next but Herlings took it away in before the first lap was complete.

Cairoli lost more positions early in the race to Lieber and TM Factory Racing’s Max Nagl. Back at the front Desalle was charging to insides of Herlings and showing the red plate holder a wheel as Paulin crashed while under pressure from Lieber.

Seewer was also riding well and up in 4th while Cairoli made a pair of passes to take back fifth from Nagl and Lieber. On lap 13 Seewer would also lose his position to Cairoli whose forward progress wouldn’t be enough to catch Gajser in 3rd.

At the finish Herlings took his 2nd race win of the day with Desalle 2nd, Gajser 3rd, Cairoli 4th, and Seewer 5th. In the overall result Herlings took the clear win with 1-1, Gajser took 2nd with 2-3, and Desalle returned to the podium for the first time since winning the MXGP of Russia with 4-2 for 3rd.

Jeffrey Herlings: “To go home with 97 points from the 2 weekends is absolutely amazing, I didn’t expect that and it has been like a dream come true. Not only didn’t I lose any points but I actually gained some, not many but a few is good so I don’t want to take this for granted. The rest of the guys rode awesome I really had to fight in the first race with Tim and the second with Clement.”

Tim Gajser: “I was feeling good coming here, the track it was just amazing. I was pushing hard to pass Clement in race 2 but had to settle for 3rd to take 2nd overall, it was a good weekend.”

Clement Desalle: “It is good to be back on the podium. It has been a long time since I have been on the podium. I had good races today with two consistent races and two good starts which were really important.” Jonass had Team HRC’s Calvin Vlaanderen just to his inside down the Pit Lane straight after the start and Rockstar Energy Husqvarna Factory Racing Thomas Kjer Olsen to his outside. Vlaanderen grabbed a handful of front brake on the entry to the next turn resulting in him going down and just moments later Olsen was down. For Olsen his crash came from landing short on the next jump and he took out his Rockstar Energy Husqvarna Factory Racing teammate Thomas Covington in the process.

With some room to breathe early Jonass pushed to pass Prado but then fell himself after losing the front end. Quick to get up Jonass was still second ahead of Kemea Yamaha Official MX2 Team’s Ben Watson and Yamaha SM Action M.C. – Migliori’s Michele Cervellin. F&H Racing Team’s Adam Sterry was in 5th with Honda 114 Motorsport’s Bas Vaessen giving chase.

Kemea Yamaha Official MX2 Team’s Anthony Rodriguez passed Vaessen on lap 3 and then got by Sterry on lap 6 for 5th. Vaessen continued to push but had a big crash just before the downhill triple and was slow to get going again before eventually pulling off the track.

Back at the front Jonass had again caught Prado with the help of lapped riders and mistakes from the Spaniard. Jonass made the impressive pass for the lead on lap 9 and then started to pull away. A few spots further back Rodriguez was searching for a way into 4th and eventually took the spot from Cervellin.

Also making big passes to finish the race was Vlaanderen who came back from last to finish 5th ahead of Cervellin and Covington. Winning the race was Jonass with Prado 2nd and Watson 3rd followed by his teammate Rodriguez in 4th.

Race 2 was off to another wild start with Jonass crashing in the first turn while Prado took the Fox Holeshot and lead. Vlaanderen had another strong jump off of the grid and kept the mistakes to a minimum in 2nd. Covington also rebounded from the bad luck of race 1 and found himself 3rd on the first laps followed by Watson and Olsen.

4 laps into the race Covington took 2nd from Vlaanderen, Jonass was up to 10th and Olsen made a pass on Watson for 4th on lap 5. Prado was able to manage his lead well as every time Covington gained ground Prado responded.

The top 5 remained unchanged for the next 10 laps until Vlaanderen made charge with 2 laps to go and reclaimed 2nd from Covington. In the meantime Jonass had clawed his way back to 6th in a massive effort. Crossing the finish first was Prado with Vlaanderen, Covington, Olsen, and Watson finishing out the top 5.

On the overall podium it was Prado by 7 points over Jonass and 9 ahead of Vlaanderen. Prado’s effort has tied the MX2 Championship standings at 550 points for both himself and Jonass. Jonass will however maintain the red plate with more race wins as the series heads to Loket for the MXGP of Czech Republic in 2 week time.

Jorge Prado: “It was a great weekend! I had to really fight every lap of the races but I was really happy taking two Fox Holeshots which made everything easier. I am really happy with my performance. Now Pauls and I are the same points so in 2 weeks we go to Loket.”

Pauls Jonass: “Actually the weekend went really good. I was feeling really good just in the second race I had a bad mistake in the first turn. I wanted to end the 2 weeks in Indonesia on a more positive note but we are looking forward to the next GP in Loket and we are going to work hard to gain more points on Jorge.”

Calvin Vlaanderen: “It feels great to be on the podium again and go back to back. I had a good day and overall I’m happy. My mechanic showed me 3 laps to go in race 2 and that’s when I took a deep breath, pushed the last few laps to make a pass and thats what happened.” 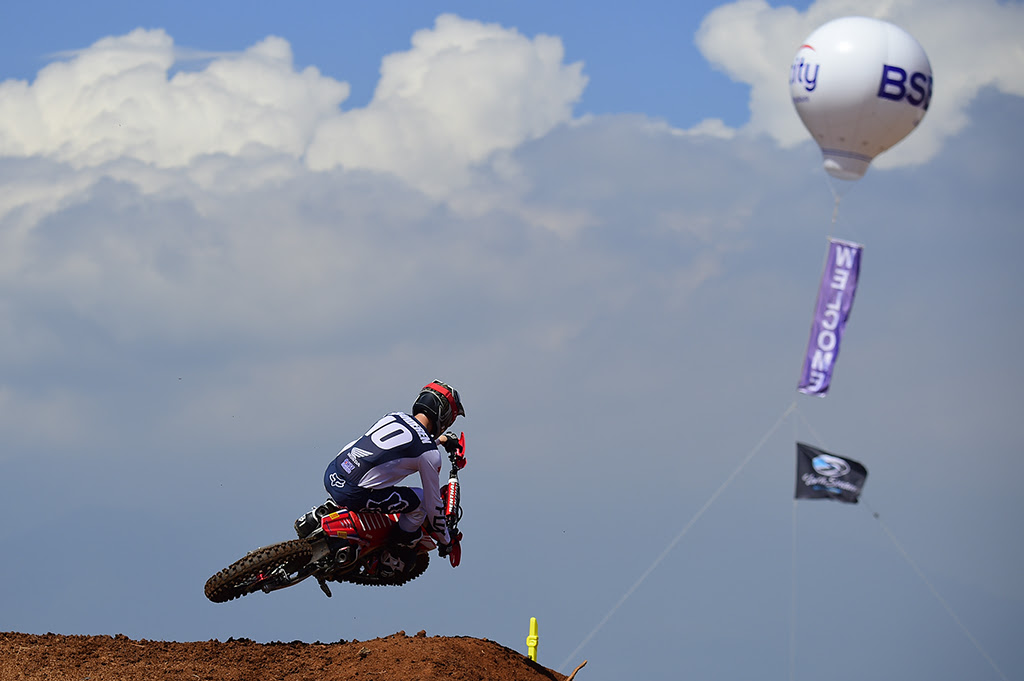 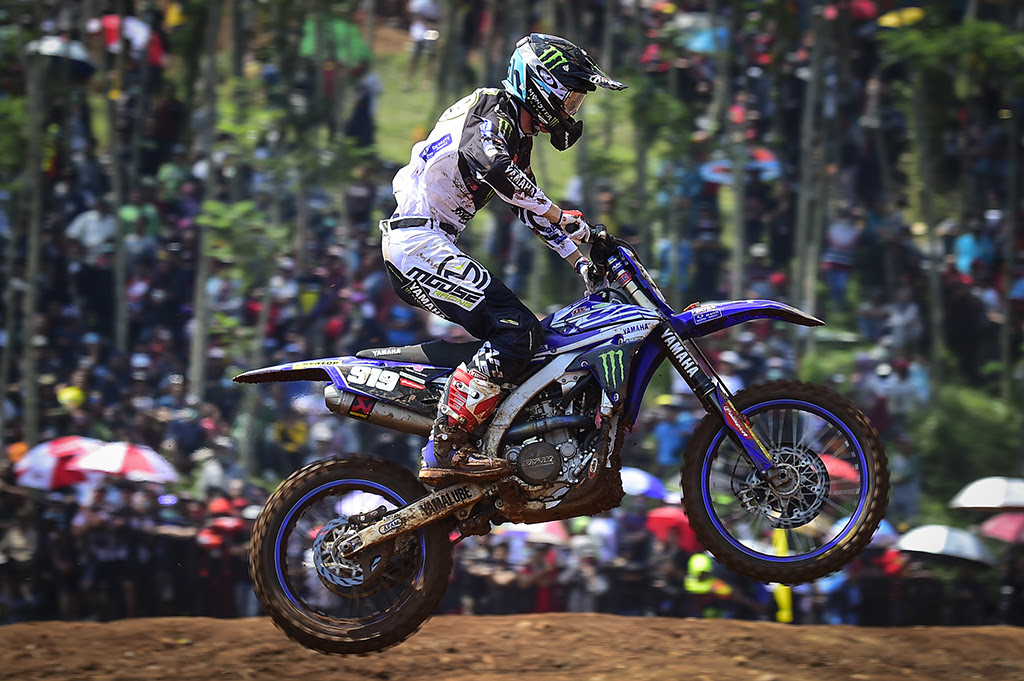