The FIM Junior Motocross World Championship has crowned its 2018 champions today in Australia. The circuit of Horsham played host to unforgettable racing especially for World Champions Bailey Malkiewicz and Caden Braswell in the 125 and 85 classes along with FIM 65cc Junior World Cup winner Braden Plath!

The day in Horsham was unforgettable and started with chilly temperatures matched by overcast skies but as soon as the racing kick started sunshine arrived setting up perfectly for great racing and spectating alike. Each world’s best young riders were tested by two races against competitors that many have never faced before which required both focus and consistency.

Italy’s Mattia Guadagnini was the fastest in the first race of the 125cc class from the start where he took the holeshot to the finish as he never looked back. Guadagnini created a gap over Australian Bailey Malkiewiczwho was the only real threat but was unable to come close enough to attack the #101 Husqvarna.

Race 2 was filled with tighter racing action after Malkiewicz took the holeshot and Guadagnini took the lead away but Malkiewicz was closer in terms of pace the second time around forcing the Italian to defend his lead instead of focus forward.

The pressure caused the Italian to make a mistake and crash in the final laps costing him the World Championship title eventually finishing 3rd. Malkiewicz took the race win and in result the overall and title of FIM Junior Motocross World Champion in front of a highly supportive home crowd.

Mattia Guadagnini had to settle for being Vice World Champion after a disappointing end to his weekend. Petr Polak from the Czech Republic joined Malkiewicz and Guadagnini on the podium in 3rd place overall after a consistent 3rd and 2nd.

Last year’s 85cc Junior World Champion, Eddie Jade Wade from the UK moved up to the 125cc category this year but was unable to line up after injuring himself in Saturday’s Qualifying Practice.

New Junior Motocross World Champion Bailey Malkiewicz said: “It has been a great event the whole weekend. Winning in front of my home crowd is just fantastic. I am so happy with the result and with my performance.” 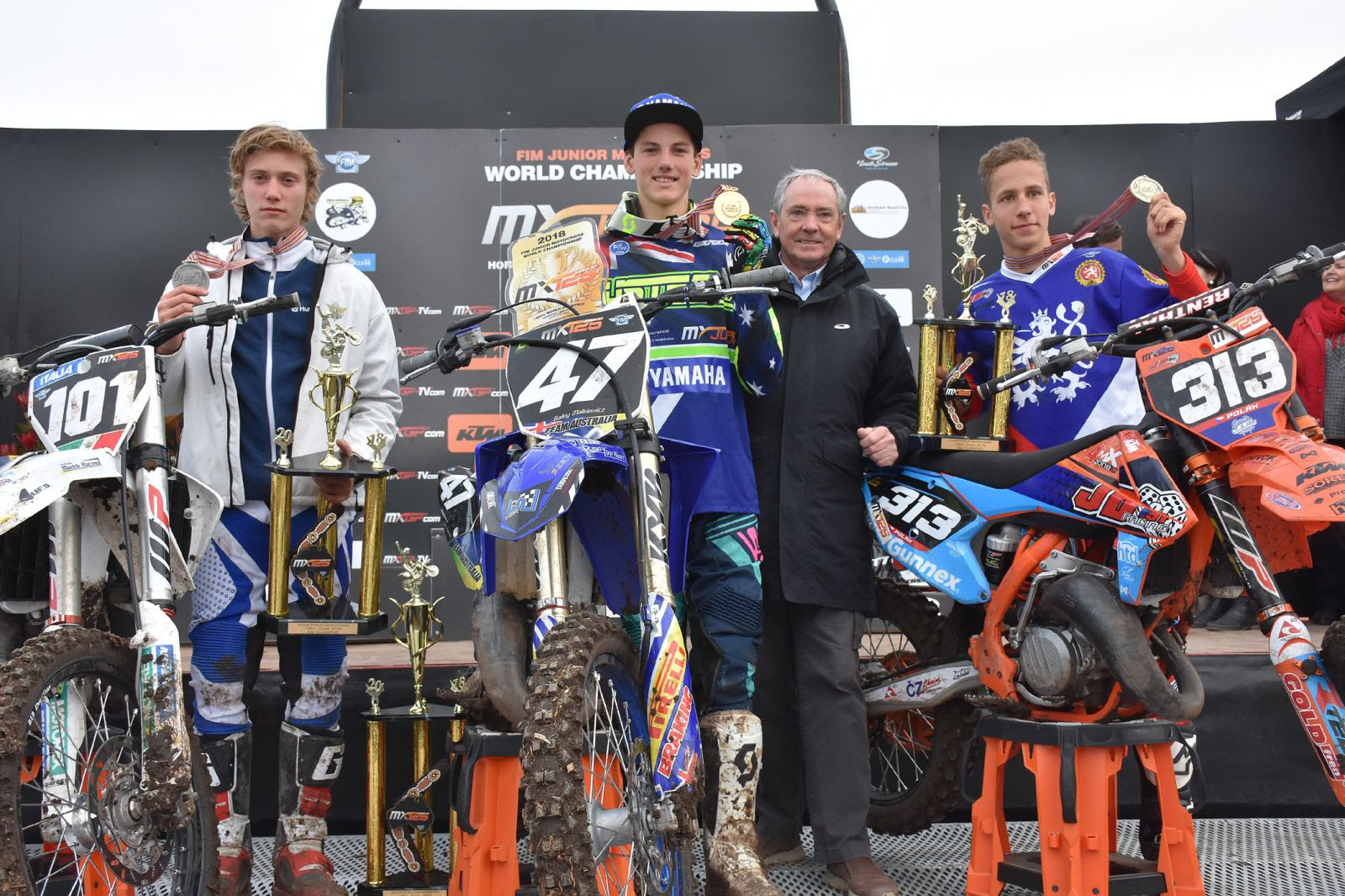 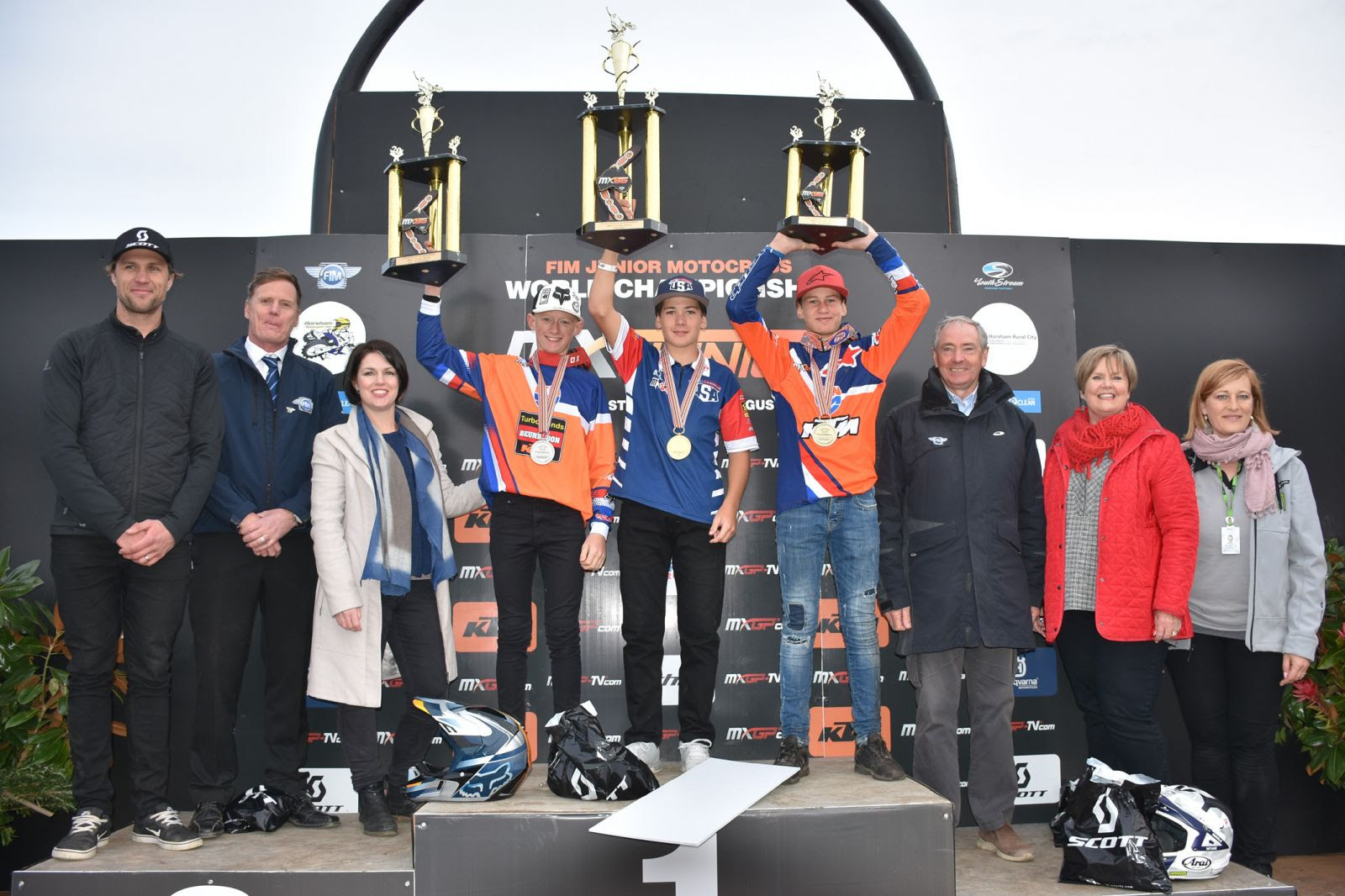 Caden Braswell from Team USA was the fastest of the 85’s off the start but the fastest in the race as a whole was Belgian rider Liam Everts, son of motocross legend Stefan Everts. Liam masterfully led Race to the finish but during race 2 his fortunes changed when he crashed and was unable to finish due to a bike issue.

Stefan Everts said: “Liam had a bad luck, he could have been a world champion, he was the fastest rider on the track in Race 1 but thankfully he crashed after the jump and is not injured.”

The Race 2 FOX Holeshot went to Dave Kooiker from the Netherlands but Caden Braswell, who take the Race 1 FOX Holeshot, made his way into the lead and took the Race 2 victory.

The strong racing from Braswell, including a battle over third in the first race with fellow American, Ryder Difrancesco, earned him the title of 2018 FIM Junior Motocross World Champion.

Team Netherlands conquered a notable performance in the 85 class with double podiums as Kay De Wolf became Vice World Champion with a 2nd and 6th place while Kay Karssemakers took 3rd overall for the second time in 2 years at the event after finishing 4th in both of today’s races.

85cc Junior Motocross World Champion Caden Braswell said: “I am very proud to become a World Champion, my dreams have come true. I am the best in the World! I am really proud of myself and for my country. I would like to thank my family and Team USA for all the support.” Excitement to race from the riders was evident since the early morning and the first 65cc race was led with a FOX Holeshot from Czech Republic’s Vitezslav Marek. A first turn crash took several riders down but all escaped unharmed.

Relative unknown Marek was the big surprise of Race 1, taking full advantage of the FOX Holeshot. The Netherlands’ Lotte Van Drunen is the only female rider in the competition regardless of racing class and she not only impressed but beat every 65cc rider other than Marek in Race 1. 3rd in race 1 was Enzo Temmerman from the USA with the two Australian’s of Kayden Minear and Braden Plath 4th and 5th while 2018 EMX65 Champion Brando Rispoli from Italy took 6th.

Race 2 started much stronger for Rispoli however as he took the FOX Holeshot. American Logan Best took over the lead and scored the race win but only managed to finish 12th in Race 1 which held him off of the podium.

Consistency proved to be the winning attribute as Australia’s own Braden Plath was crowned 65cc Junior World Cup winner after coming back from the start crash in race to finish 5th followed by 2nd in Race 2. Temmerman’s 3rd and 4th place finishes scored him the second spot on the podium while Rispoli took 3rd after finished with 6-3 scores.

Junior World Cup Winner, Braden Plath: “I did not know most of the riders because we have never raced together before but I did not expect to finish at the top. I am really satisfied with the result and happy to win this title in my home country.” 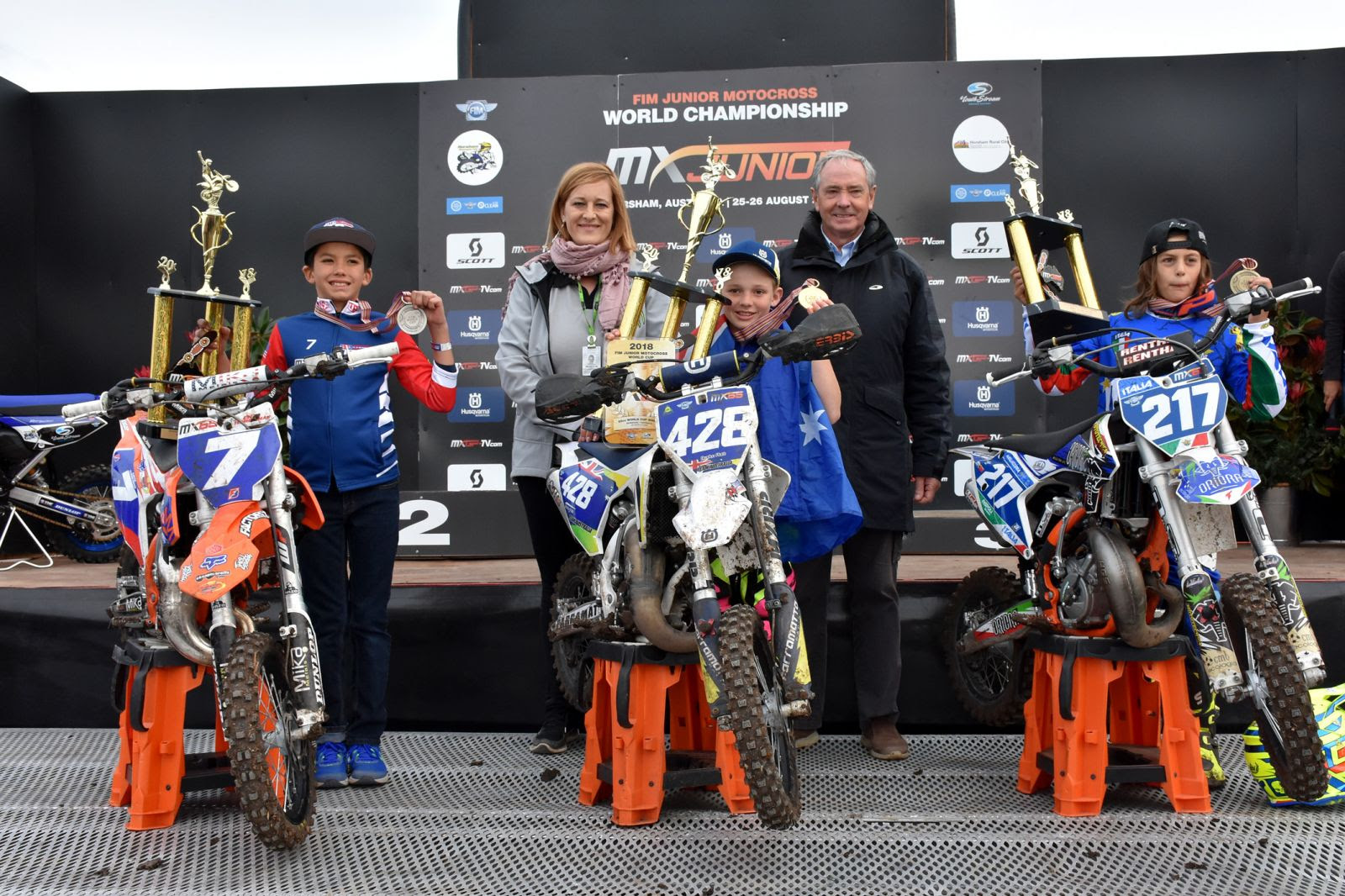 The winning team in the nations qualification was none other than the host country of Australia. Australia’s top performing riders Bailey Malkiewicz, Brad West, and Braden Plath helped the team to 10 points tying with Team Netherlands who were aided by the strong races of Raivo Dankers, Kay De Wolf, and Lotte Van Drunen while Team Italy took 3rd including Mattia Guadagnini, Andrea Viano, and Brando Rispoli with 12 points.

Though Italy didn’t win the overall title as the best team they did claim the 2018 FIM Ride Green Cup as recognition for their promotion of a sustainable and environmentally friendly approach to racing. 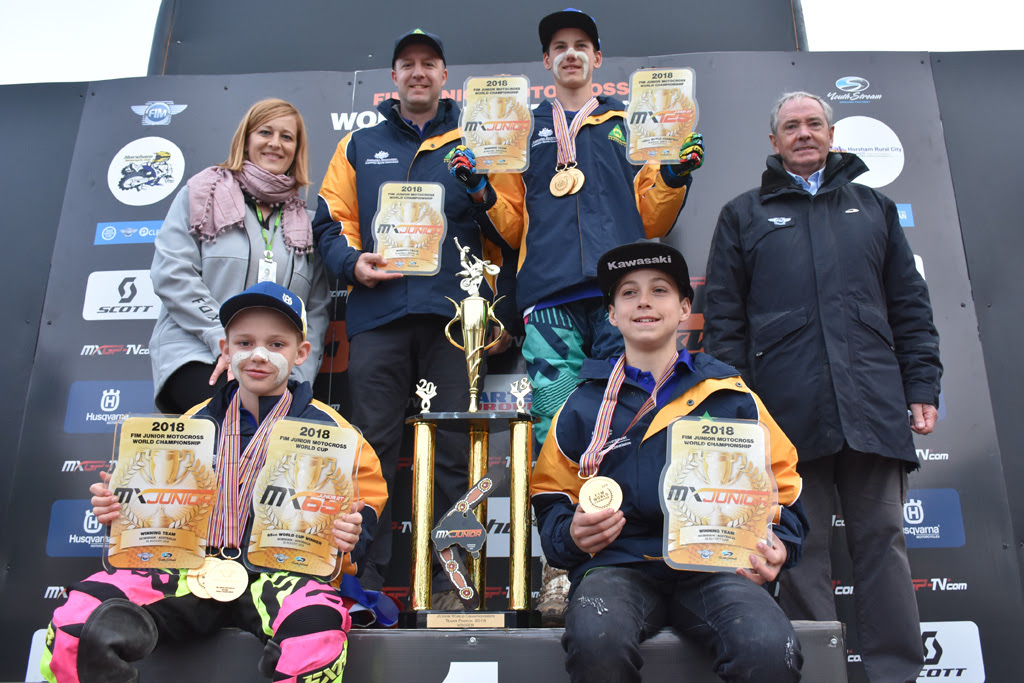 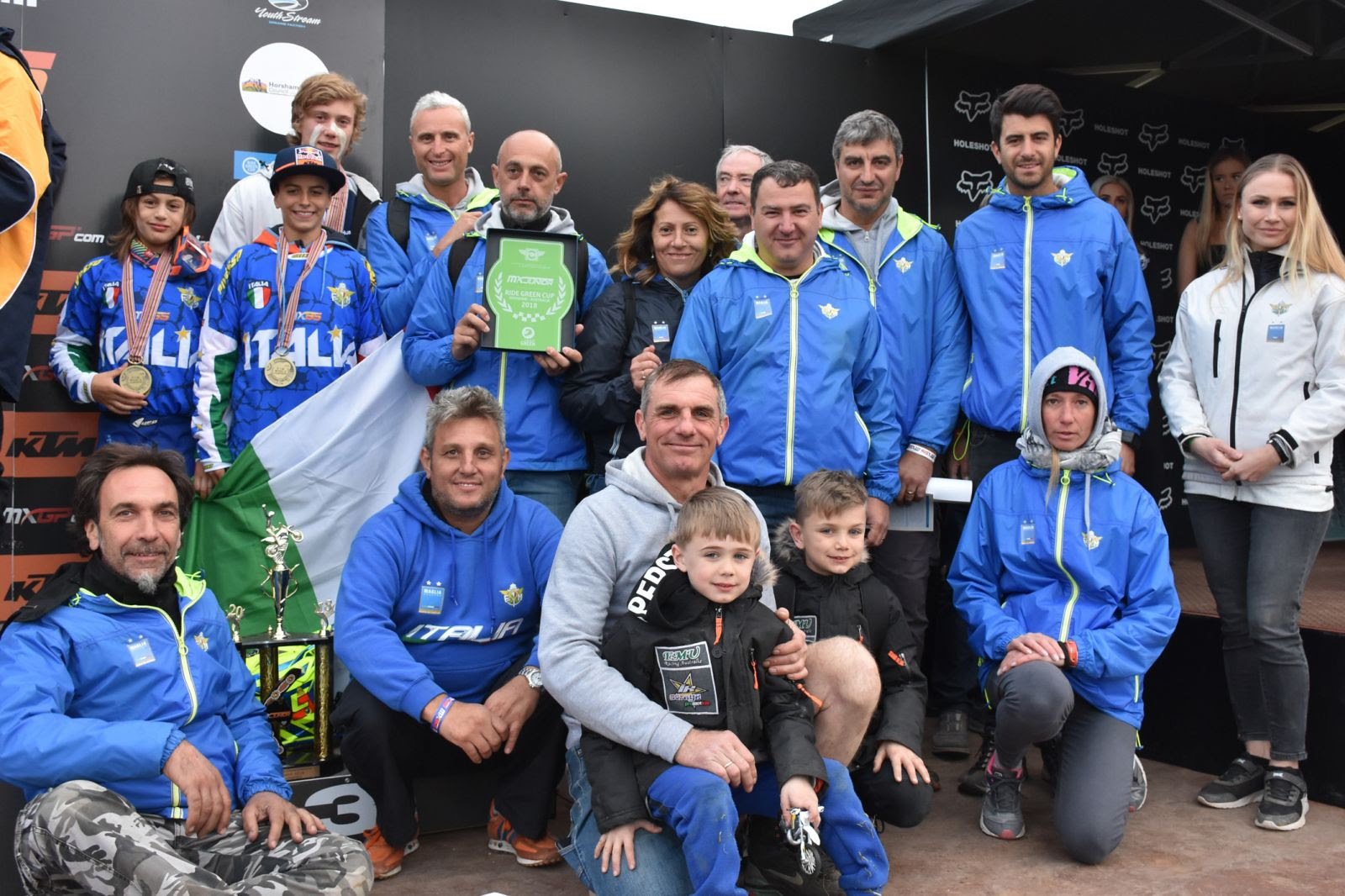 Everts to race Lyng Revo round