The 2018 MXGP Season’s 6th round is complete from the Russian circuit of Orlyonok. The MXGP of Russia hosted the best riders of the FIM Motocross World Championship with great success for the second year in a row. Different conditions, improved weather, and a Monday-Tuesday schedule led to amazing racing and Briton Ben Watson took his first ever podium finish with third in the MX2 class.

For the first time in 2018 the MXGP class was won by a non KTM rider, the Monster Energy Kawasaki Racing Team bike piloted by Clement Desalle took Russia by storm in 2017 and has repeated his performance again this year. Also returning to the top step of the podium in Russia with blistering speed was Red Bull KTM Factory Racing’s Pauls Jonass.

MXGP’s Race 1 was intense and another memorable battle between the Red Bull KTM Factory Racing riders of Antonio Cairoli and Jeffrey Herlings. On the start Cairoli took the Fox Holeshot but Monster Energy Kawasaki Factory Racing Team’s Clement Desalle was right alongside and Herlings just behind.

Desalle took the lead on the opening lap from Cairoli with better drive up one of the many steep hills of the Orlyonok Circuit. Behind Herlings in third was Rockstar Energy Husqvarna Factory Racing’s Gautier Paulin.

Monster Energy Yamaha Factory MXGP’s Jeremy Van Horebeek ran in 5th the first 2 laps before Team HRC’s Tim Gajser took the position away from the Belgian. Back at the front Herlings, who had lost time from Cairoli early in the race, was charging in an attempt to pass Cairoli while Desalle sprinted away.

Herlings made several attempts at the Italian but was unable to make anything stick. On the final lap Cairoli closed gap to Desalle but for both him and Herlings it was a little too late. Desalle took the race win, the first of 2018 not by a KTM, with Cairoli 2nd and Herlings 3rd.

For Race 2 Herlings was determined to take the win and gain as many points as possible. When the gate dropped the #84 took the FOX Holeshot ahead of Desalle and Gajser. For Desalle all that was needed to secure the overall was second in race 2.

Cairoli, who started in 4th place, faced pressure from Monster Energy Yamaha Factory MXGP’s Romain Febvre but kept his focus on passing Gajser. On lap 10 Cairoli bobbled while trying to catch Gajser and lost traction before falling. The mistake from Cairoli cost him 1 position to Febvre as he remounted in 5th.

While Herlings and Desalle crossed the finish first and second Febvre took third from Gajser after a great battle for the position. In the overall Desalle had 47 points with 1-2 finishes, Herlings 45 points going 3-1, and Cairoli 38 after his 2-5 score. Meanwhile BOS GP’s Russian star Evgeny Bobryshev finished 14th overall at his home GP.

Clement Desalle after the races said: I feel good, today was really good for me… I wanted to take the GP step by step and actually to finish with a really good day and win. I am really happy about it, about my riding, about quite a few things, to finally have a green bike on the podium in first position with my team it is really nice.”

Jeffrey Herlings: “I took good starts which is important for me, we are getting better and better at that, more controlled. Yeah, in the first race we got third which messed up the overall but to come back swinging in the second race with a FOX Holeshot and then ride good without mistakes… I’m happy to go to Latvia in 2 weeks time, that is one of my favorite tracks on the calendar.”

Antonio Cairoli: “It is good that we made it to the podium because it has been my goal since the beginning of the season, to be on the podium every race…. so it is ok. It is also good that Clement now is getting back into form and that he can be in the mix, it is good for the championship.” 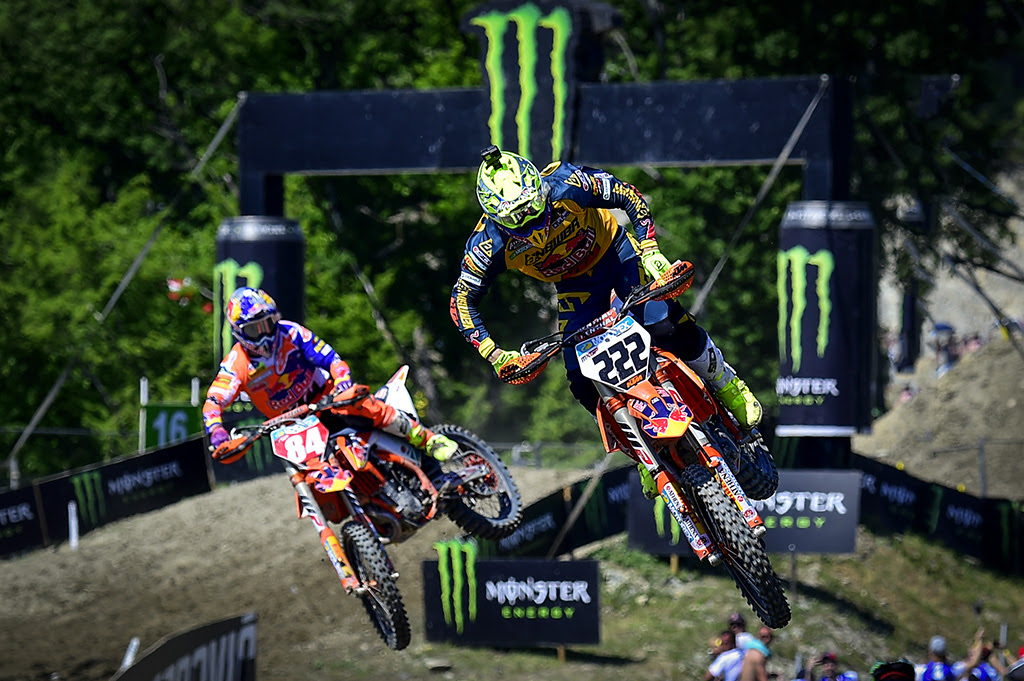 After two difficult GPs at Trentino and Portugal Red Bull KTM Factory Racing’s Pauls Jonass returned to his winning shape this week. Lining up to the gate first after winning Monday’s Qualifying Race Jonass came out if the first corner of race 1 in second.

Leading the way with the Fox Holeshot was Red Bull KTM Factory Racing’s Jorge Prado. Prado led his Latvian teammate the opening lap but just across the finish line jump Jonass keep his bike lower and was quicker to get the power back to the ground.

As the pair came up the hill and passed the mechanics area Jonass took the lead. Behind the KTM’s was Kemea Yamaha Official MX2 Team’s Ben Watson first followed by F&H Racing Kawasaki’s Adam Sterryand shortly after his Kemea teammate Jago Geerts.

Olsen moved to 4th ahead of Team HRC’s Calvin Vlaanderen but then, in a surprising ride from KTM Silver Action’s Stephen Rubini, Vlaanderen was passed. Rubini then charged to the back of Olsen but before making a pass spun out and lost his hard fought 5th back to Vlaanderen.

On the next to last lap Rubini, who was riding the track with more flow than most, took the spot back from Vlaanderen. Across the finish first was Jonass then Prado, Watson, Olsen, and Rubini.

Race 2 was again led by the KTM’s but the second time around it was a FOX Holeshot from Jonass as Prado pursued. Team Martin Honda Racing’s Michele Cervellin was third from the first lap and while Jonass and Prado pulled away he found himself with a comfortable cushion back to Olsen in 4th.

Ben Watson was 5th on lap one behind Olsen but lost positions to both STC Racing Husqvarna’s Henry Jacobi and Vlaanderen. On lap 3 Jacobi dropped to eight moving Watson back up and into 6th.

Watson had Vlaanderen just in front of him from lap 2 until lap 16 when the HRC rider passed Olsen for 4th. The pass on Olsen was important in the overall standings as it gave the final podium position to Watson.

On the last lap Prado charged to the inside of Jonass but wasn’t close enough to make a clean pass which resulted in Jonass taking the race win and the overall ahead of him. Cervellin held onto third with Vlaanderen and Olsen rounding out the top 5. Watson finished 6th but was unaware the result earned him a career first podium until riding up to his team manager who informed the young brit with much joy.

Pauls Jonass: “I really wanted to have two good races heading into my home GP and I did it, I had two good starts, first start I was second behind Jorge and I managed to pass him pretty quick so that was pretty good and in the second race I got a Holeshot and pulled a little gap. I am really happy going 1-1 again and really looking forward to my home GP.”

Jorge Prado: “The weekend was great… I am really happy with 2 second places and second overall especially on track that was difficult for me so I’m really happy.”

Ben Watson: “I honestly have no words for this weekend… I just gave it everything I had and I didn’t actually realize I was on the podium, I was actually gutted because I thought I finished 4th again. I came off the track and my team boss was there, I was just speechless.” 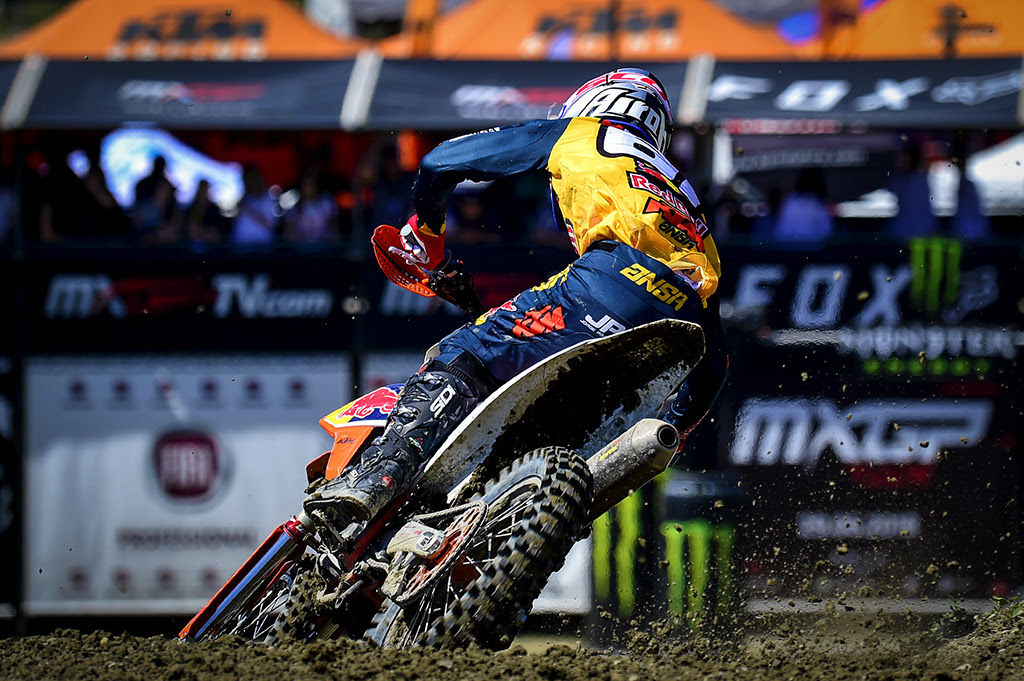 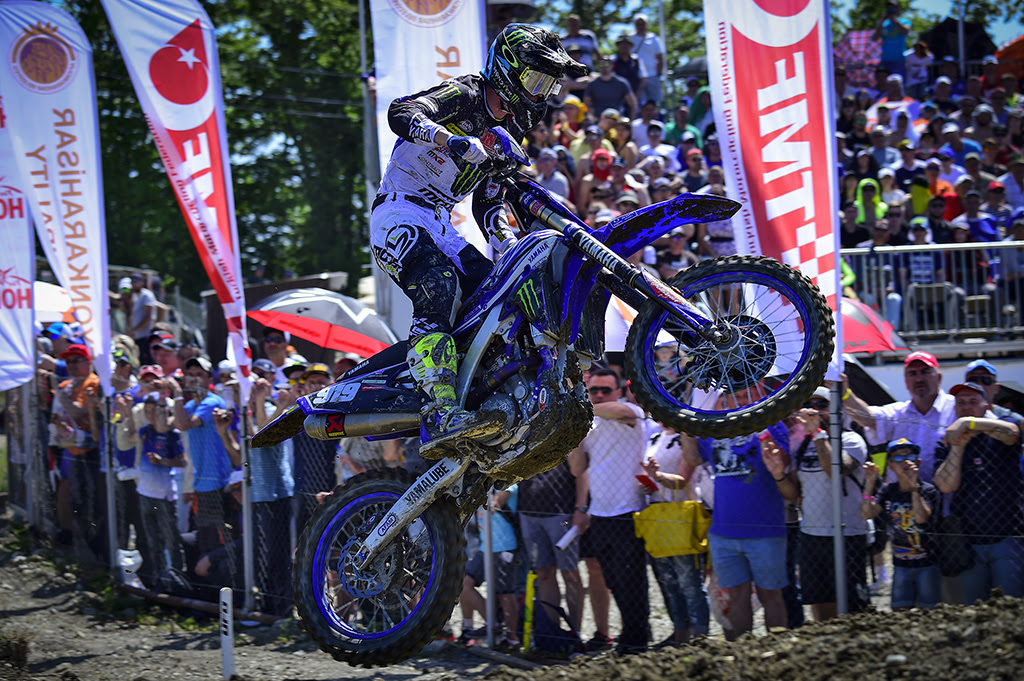 Cairoli stays at De Carli KTM until end of 2020 Watson does the Brit pack proud