Skip to content
You are here
Home > MOTO HEADLINES > Who’ll be the Swedish GP Master? The MXGP crew is getting set for the weekend as the 16th round of the FIM Motocross World Championship takes place in Uddevalla, Sweden. The gorgeous yet rocky MXGP of Sweden makes a return to the calendar after being missed in 2016. Uddevalla has a long history first hosting the World Championship in 1958 and prior to 2016 was on the calendar every year between 2001 and 2015.

As always MXGP and MX2 will race this weekend but so too will EMX125 Presented by FMF Racing and the Honda 150 European Championship. For the 125cc’s this is the final round of their season. The consistent BUD Racing Monster Energy Rider Brian Moreau leads the points by a margin of 19 over Gianluca Facchetti setting the stage for an epic showdown. Meanwhile in Honda 150 European Championship the top three of Adam Nordstrom Graaf, Luis Outeiro, and Andrea Adamo are only separate by 6 points leaving the title wide open.

Red Bull KTM Factory Racing’s Jeffrey Herlings wins his 2nd GP in a row last weekend and continues to push for wins. However with only 4 rounds remaining and 97 points required to catch the championship leader Red Bull KTM Factory Racing’s Antonio Cairoli it may be a little too late. Cairoli’s most recent memory of the Uddevalla circuit is most like one he would prefer to forget as he finished outside the top 5 in 2015. Besides his 2015 mishap Cairoli has excelled on the circuit winning the GP 6 times and finishing on the podium twice.

Herlings has remained determined as he knows from personal experience that in the MXGP series anything is possible. It was at this track that Herlings ended his 2015 MX2 season while leading the championship by 78 points. However the other six years that he raced Sweden he was 1st 3 times and 2nd the other 3.

Monster Energy Yamaha Factory MXGP Team’s Romain Febvre has yet to reach the podium in 2017 coming closest last week in Switzerland and he would like to replicate his 2015 Swedish success where he dominated with double victories over his teammate Jeremy Van Horebeek. While team Suzuki World MXGP’s Kevin Strijbos is another rider who has done well in the past here finishing 3rd overall in 2015, 2014, and 2012.

Team HRC’s Tim Gajser seems fond of the Swedish soil as the two times he has raced the circuit he won the MX2 overall in 2015 and was third 2014.

Monster Energy Kawasaki Racing Team’s Clement Desalle comes of a poor weekend in Switzerland. Desalle is hoping to turn his luck around this weekend in Sweden where he won in 2012 and reached the podium in 2013.

Rockstar Energy Husqvarna Factory Racing’s Gautier Paulin had his best weekend as of late in Switzerland when he returned the podium with second overall. Paulin has achieved the podium three times in Sweden but all were in MX2 with his best 450 result being 5th. It is not go without mention that Seewer showed incredible determination and speed as he came through the field from last position to finish 5th in race 2 of Switzerland. Seewer will clearly be looking for redemption and the win. Historically Seewer has reached the podium in Sweden during the 2015 season and finished 10th in 2014.

While Paturel himself is not a championship contender his newly found confidence and impressive results could interfere with the title hopes of either Jonass or Seewer. Paturel finished 10th overall in Sweden 2 years ago.

Rockstar Energy Husqvarna Factory Racing’s Thomas Kjer Olsen is one to consider when thinking of who might take the overall this Sunday. While Olsen is a rookie he is experienced racing in this region of Europe, hailing from nearby Denmark this is the closest he will have to a home GP.

Kemea Yamaha Official MX Team’s Alvin Ostlund will look to shine this Sunday for what is his first home GP. Ostlund’s best result this season comes from Russia with 5th overall.

LRT KTM’s Julien Lieber was having a good weekend in Switzerland but a racing incident where he and Seewer collided midair dropped him multiple positions. If Lieber can have another pair of good starts and keep it on two wheels a podium is well within reason. 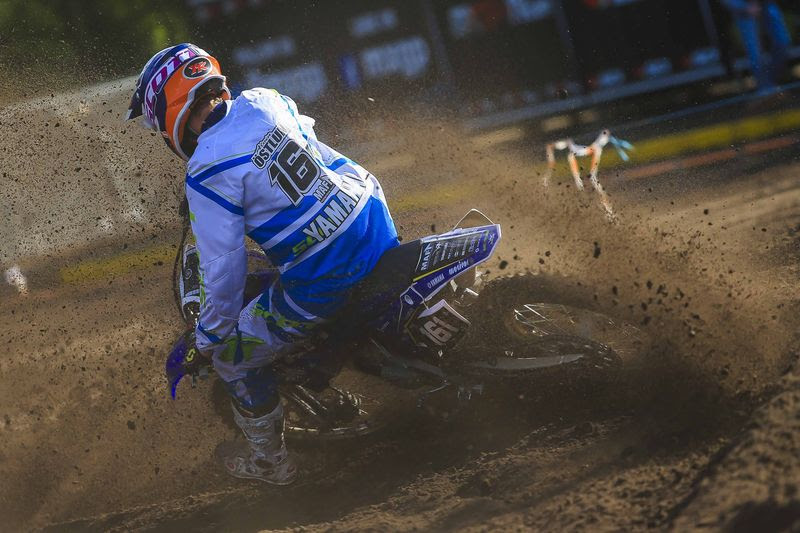 Watson Brothers square up on the sand!